The National Freight Strategic Plan and the Inland Waterways

This article summarizes certain of the comments that were submitted by Inland Rivers, Ports and Terminals, Inc. (IRPT) in response to DOT’s request. IRPT is a nonprofit trade association with nearly 300 members nationwide that advocates for our nation’s inland waterways and the industries and companies that serve and utilize our inland rivers, ports and terminals. I am the Secretary-Treasurer of IRPT and I assisted the association’s Executive Director, Aimee Andres, in the preparation of these comments.

We hear frequently about the 24,000 commercially navigable miles of inland and intracoastal waterways that move domestic and international cargo in America’s maritime transportation system. But what transforms those thousands of miles of waterways into a freight transportation system are the ports and terminals that are on them. Inland and small coastal ports and private terminals are critically important for domestic uses and export of agriculture, mining, chemical, energy and other commodities.

In contrast, the WCSC itself lists no less than 150 ports as “Principal Ports of the United States” on its website, many of which have annual foreign and domestic trade less than 2 million short tons. The website of the U.S. Maritime Administration (MarAd) goes further:

Ports are a vital part of a nation’s maritime transportation system. The United States has more than 300 – operated by states, counties, municipalities and private corporations. Many of our ports, including the waterways and facilities connecting them, are complicated elements that integrate water, rail, road and even airborne transportation modes.

In contrast to the list of specific components that are prescribed for inclusion in the interim version, the FAST Act directs DOT to develop the final version of the National Multimodal Freight Network by considering a dozen factors of much broader scope, and then only after soliciting input from a wide spectrum of stakeholders through a public process that includes notice and an opportunity to comment on a draft system. These factors include, for example, the origins and destinations of freight movement within, to and from the United States; the volume, value, tonnage and strategic importance of freight; access to major areas for manufacturing, agriculture or natural resources; and intermodal links and intersections that promote connectivity (49 U.S.C. section 70103(c)). These factors would result in the inclusion in the final version of the National Multimodal Freight Network of many more public inland and coastal ports than those that meet the threshold of 2 million tons in annual trade.

By several measures, therefore, if DOT were to use only the 113 ports currently designated in the interim version of the National Multimodal Freight Network to inform its development of a national freight strategy, the maritime sector of that strategy would suffer from a significantly inaccurate and understated representation of many of the public inland ports and smaller coastal ports. 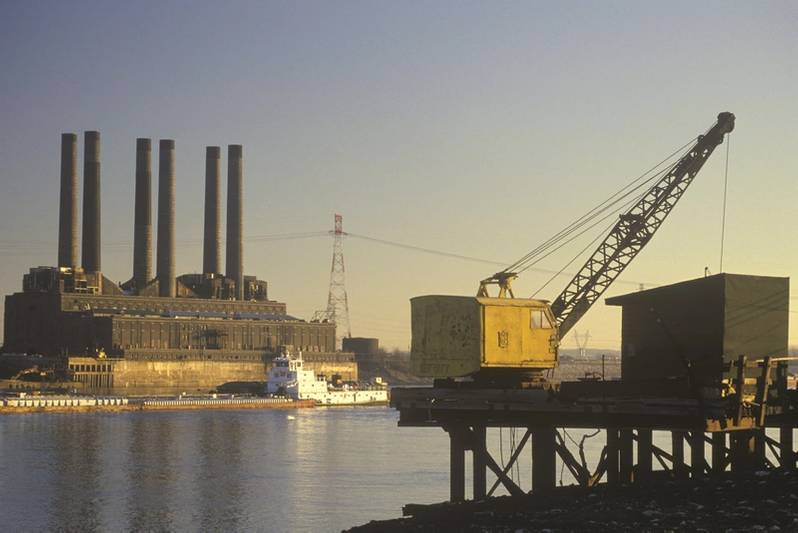 The National Freight Strategic Plan could also help the inland waterways make a greater contribution to our nation’s freight transportation system by providing for expanded funding opportunities for inland and smaller coastal ports and private terminals, and by remedying the imbalance that they face even within the limited funding opportunities that exist.

Historically, federal assistance to the inland river ports and terminals has been provided through MarAd. In the Further Consolidated Appropriations Act of 2020 (Appropriations Act) signed on December 20, 2019, MarAd’s budget was funded at over $1 billion, but with less than $10 million directed to inland ports through the Marine Highways Program. A significant further limitation from the perspective of inland and small coastal ports is that this amount does not generally extend to dry or liquid bulk commodities.

The fact remains, however, that the inland and small coastal ports and terminals will not be on a level playing field in terms of federal funding opportunities until there is specific dedicated funding for them by way of either a reserved percentage of existing program funding (INFRA, TIGER, BUILD, etc.) or a standalone discretionary grant program dedicated to the many inland private and public facilities that serve the nation’s freight transportation needs on the inland waterways. For far too long, appropriation bills such as INFRA and BUILD programs and authorizing legislation like the FAST Act and WRDA have underfunded inland facilities. Infrastructure projects sought by inland facilities are far less costly than the minimum required for those programs, but the composite result provided by potentially funding these projects could be exponentially beneficial to the nation’s transportation network.

IRPT has undertaken a legislative initiative of proposing to Congress an Inland Port and Terminal Grant Program to level the competitive playing field. This program would be similar to MarAd’s small shipyard grant program, in that the program would be administered by MarAd, would adhere to 60-day submission and 120-day award distribution requirements, and would include both private and public facilities. The program would differ from the small shipyard grant program in that funds could be used to construct buildings, physical facilities, purchase equipment, etc.; and funds could be used for fixed landside infrastructure projects, such as docks, wharves, piers and road and rail improvements. The program would also differ from the Marine Highways program, in that the program would extend to both private and public entities, would be available for fixed landside infrastructure projects such as those mentioned above, and would extend to liquid and dry bulk cargoes.

Most of the discretionary grant programs for federal funding assistance currently require a public sponsor, yet many of the facilities moving the nation’s freight are not located within a public port or they are located in rural areas in which the local public entities have very limited staff and resources. In such situations it is often difficult for a private terminal to secure a public sponsor in order to be eligible for federal funding assistance, since securing a public sponsor often means that the sponsor must spend time and resources to administer the grant, perform audits and carry out other tasks.

Private terminals on the inland waterways create jobs, relieve landside traffic congestion, reduce landside fuel consumption and emissions and avoid wear and tear on roads, bridges and rails no less than their public port counterparts. It is therefore, a benefit to the general public in terms of job creation, safety, environment and cost savings to allow private terminal facilities to be eligible for federal funding assistance. 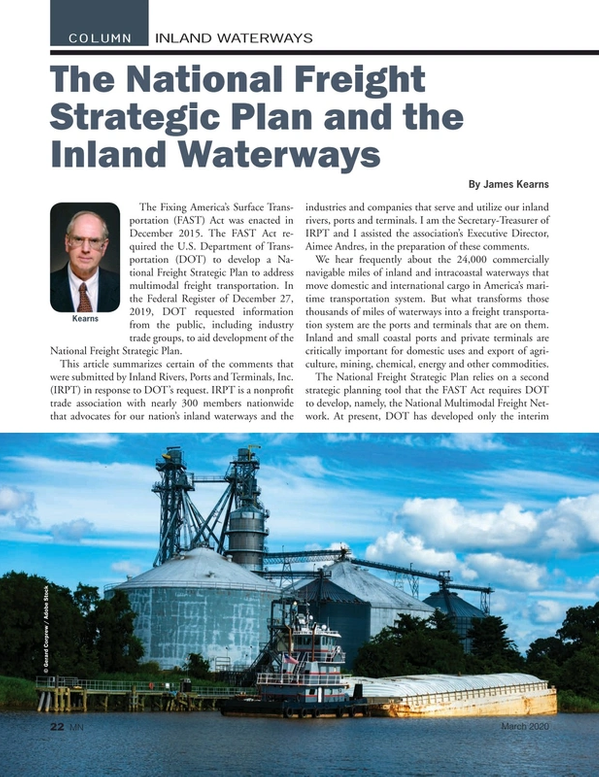 Read The National Freight Strategic Plan and the Inland Waterways in Pdf, Flash or Html5 edition of March 2020 Marine News

Other stories from March 2020 issue