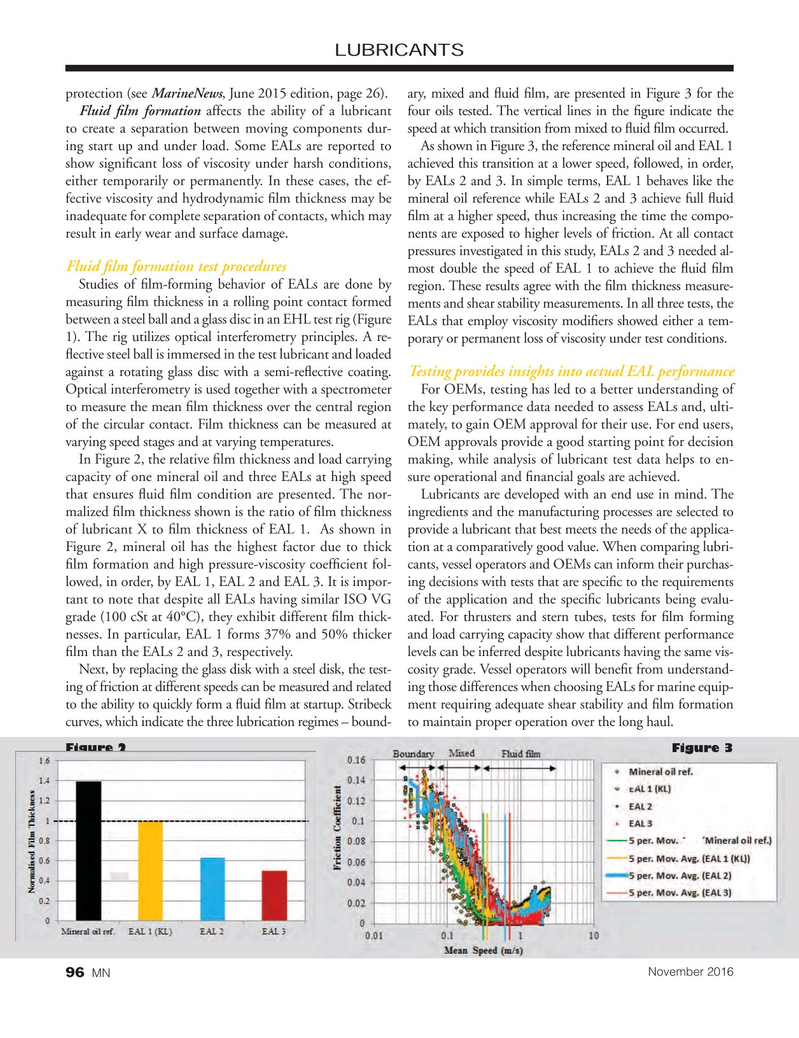 Fluid ? lm formation affects the ability of a lubricant four oils tested. The vertical lines in the ? gure indicate the to create a separation between moving components dur- speed at which transition from mixed to ? uid ? lm occurred. ing start up and under load. Some EALs are reported to As shown in Figure 3, the reference mineral oil and EAL 1 show signi? cant loss of viscosity under harsh conditions, achieved this transition at a lower speed, followed, in order, either temporarily or permanently. In these cases, the ef- by EALs 2 and 3. In simple terms, EAL 1 behaves like the fective viscosity and hydrodynamic ? lm thickness may be mineral oil reference while EALs 2 and 3 achieve full ? uid inadequate for complete separation of contacts, which may ? lm at a higher speed, thus increasing the time the compo- result in early wear and surface damage. nents are exposed to higher levels of friction. At all contact pressures investigated in this study, EALs 2 and 3 needed al-

Fluid ? lm formation test procedures most double the speed of EAL 1 to achieve the ? uid ? lm

Studies of ? lm-forming behavior of EALs are done by region. These results agree with the ? lm thickness measure- measuring ? lm thickness in a rolling point contact formed ments and shear stability measurements. In all three tests, the between a steel ball and a glass disc in an EHL test rig (Figure EALs that employ viscosity modi? ers showed either a tem- 1). The rig utilizes optical interferometry principles. A re- porary or permanent loss of viscosity under test conditions. ? ective steel ball is immersed in the test lubricant and loaded

Optical interferometry is used together with a spectrometer For OEMs, testing has led to a better understanding of to measure the mean ? lm thickness over the central region the key performance data needed to assess EALs and, ulti- of the circular contact. Film thickness can be measured at mately, to gain OEM approval for their use. For end users, varying speed stages and at varying temperatures. OEM approvals provide a good starting point for decision

In Figure 2, the relative ? lm thickness and load carrying making, while analysis of lubricant test data helps to en- capacity of one mineral oil and three EALs at high speed sure operational and ? nancial goals are achieved. that ensures ? uid ? lm condition are presented. The nor- Lubricants are developed with an end use in mind. The malized ? lm thickness shown is the ratio of ? lm thickness ingredients and the manufacturing processes are selected to of lubricant X to ? lm thickness of EAL 1. As shown in provide a lubricant that best meets the needs of the applica-

Figure 2, mineral oil has the highest factor due to thick tion at a comparatively good value. When comparing lubri- ? lm formation and high pressure-viscosity coef? cient fol- cants, vessel operators and OEMs can inform their purchas- lowed, in order, by EAL 1, EAL 2 and EAL 3. It is impor- ing decisions with tests that are speci? c to the requirements tant to note that despite all EALs having similar ISO VG of the application and the speci? c lubricants being evalu- grade (100 cSt at 40°C), they exhibit different ? lm thick- ated. For thrusters and stern tubes, tests for ? lm forming nesses. In particular, EAL 1 forms 37% and 50% thicker and load carrying capacity show that different performance ? lm than the EALs 2 and 3, respectively. levels can be inferred despite lubricants having the same vis-

Next, by replacing the glass disk with a steel disk, the test- cosity grade. Vessel operators will bene? t from understand- ing of friction at different speeds can be measured and related ing those differences when choosing EALs for marine equip- to the ability to quickly form a ? uid ? lm at startup. Stribeck ment requiring adequate shear stability and ? lm formation curves, which indicate the three lubrication regimes – bound- to maintain proper operation over the long haul.