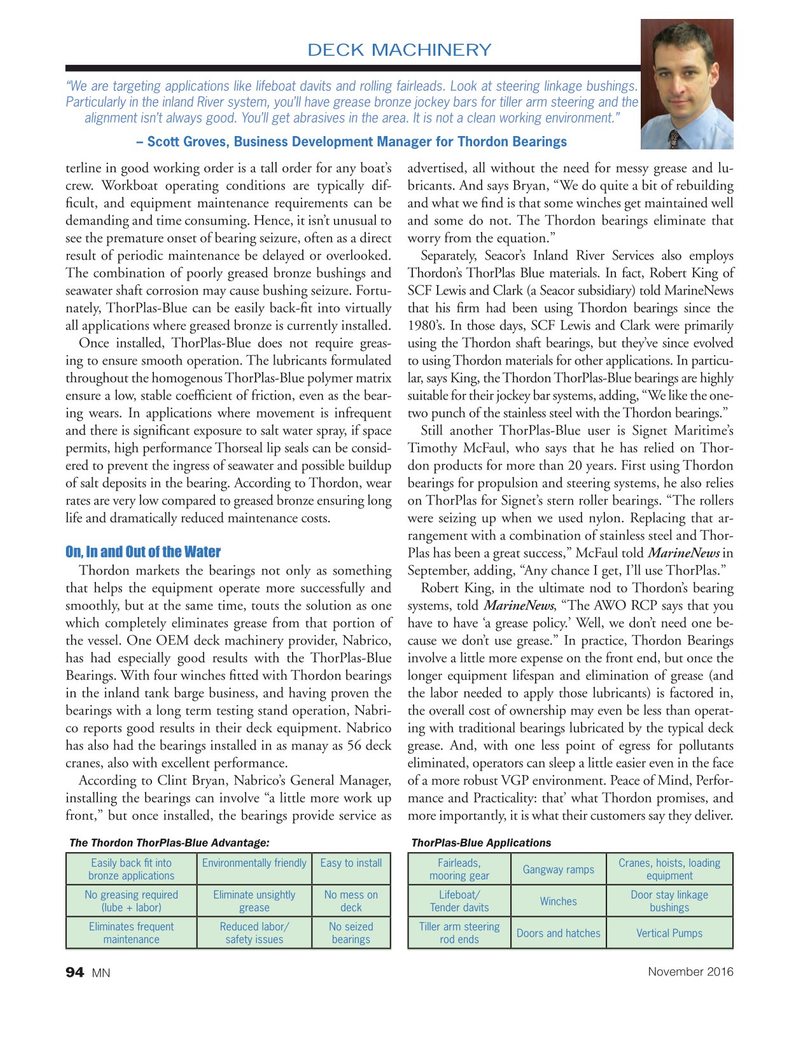 Particularly in the inland River system, you’ll have grease bronze jockey bars for tiller arm steering and the alignment isn’t always good. You’ll get abrasives in the area. It is not a clean working environment.” – Scott Groves, Business Development Manager for Thordon Bearings terline in good working order is a tall order for any boat’s advertised, all without the need for messy grease and lu- crew. Workboat operating conditions are typically dif- bricants. And says Bryan, “We do quite a bit of rebuilding ? cult, and equipment maintenance requirements can be and what we ? nd is that some winches get maintained well demanding and time consuming. Hence, it isn’t unusual to and some do not. The Thordon bearings eliminate that see the premature onset of bearing seizure, often as a direct worry from the equation.” result of periodic maintenance be delayed or overlooked. Separately, Seacor’s Inland River Services also employs

The combination of poorly greased bronze bushings and Thordon’s ThorPlas Blue materials. In fact, Robert King of seawater shaft corrosion may cause bushing seizure. Fortu- SCF Lewis and Clark (a Seacor subsidiary) told MarineNews nately, ThorPlas-Blue can be easily back-? t into virtually that his ? rm had been using Thordon bearings since the all applications where greased bronze is currently installed. 1980’s. In those days, SCF Lewis and Clark were primarily

Once installed, ThorPlas-Blue does not require greas- using the Thordon shaft bearings, but they’ve since evolved ing to ensure smooth operation. The lubricants formulated to using Thordon materials for other applications. In particu- throughout the homogenous ThorPlas-Blue polymer matrix lar, says King, the Thordon ThorPlas-Blue bearings are highly ensure a low, stable coef? cient of friction, even as the bear- suitable for their jockey bar systems, adding, “We like the one- ing wears. In applications where movement is infrequent two punch of the stainless steel with the Thordon bearings.” and there is signi? cant exposure to salt water spray, if space Still another ThorPlas-Blue user is Signet Maritime’s permits, high performance Thorseal lip seals can be consid- Timothy McFaul, who says that he has relied on Thor- ered to prevent the ingress of seawater and possible buildup don products for more than 20 years. First using Thordon of salt deposits in the bearing. According to Thordon, wear bearings for propulsion and steering systems, he also relies rates are very low compared to greased bronze ensuring long on ThorPlas for Signet’s stern roller bearings. “The rollers life and dramatically reduced maintenance costs. were seizing up when we used nylon. Replacing that ar- rangement with a combination of stainless steel and Thor-

On, In and Out of the Water Plas has been a great success,” McFaul told MarineNews in

Thordon markets the bearings not only as something September, adding, “Any chance I get, I’ll use ThorPlas.” that helps the equipment operate more successfully and Robert King, in the ultimate nod to Thordon’s bearing smoothly, but at the same time, touts the solution as one systems, told MarineNews, “The AWO RCP says that you which completely eliminates grease from that portion of have to have ‘a grease policy.’ Well, we don’t need one be- the vessel. One OEM deck machinery provider, Nabrico, cause we don’t use grease.” In practice, Thordon Bearings has had especially good results with the ThorPlas-Blue involve a little more expense on the front end, but once the

Bearings. With four winches ? tted with Thordon bearings longer equipment lifespan and elimination of grease (and in the inland tank barge business, and having proven the the labor needed to apply those lubricants) is factored in, bearings with a long term testing stand operation, Nabri- the overall cost of ownership may even be less than operat- co reports good results in their deck equipment. Nabrico ing with traditional bearings lubricated by the typical deck has also had the bearings installed in as manay as 56 deck grease. And, with one less point of egress for pollutants cranes, also with excellent performance. eliminated, operators can sleep a little easier even in the face

According to Clint Bryan, Nabrico’s General Manager, of a more robust VGP environment. Peace of Mind, Perfor- installing the bearings can involve “a little more work up mance and Practicality: that’ what Thordon promises, and front,” but once installed, the bearings provide service as more importantly, it is what their customers say they deliver.