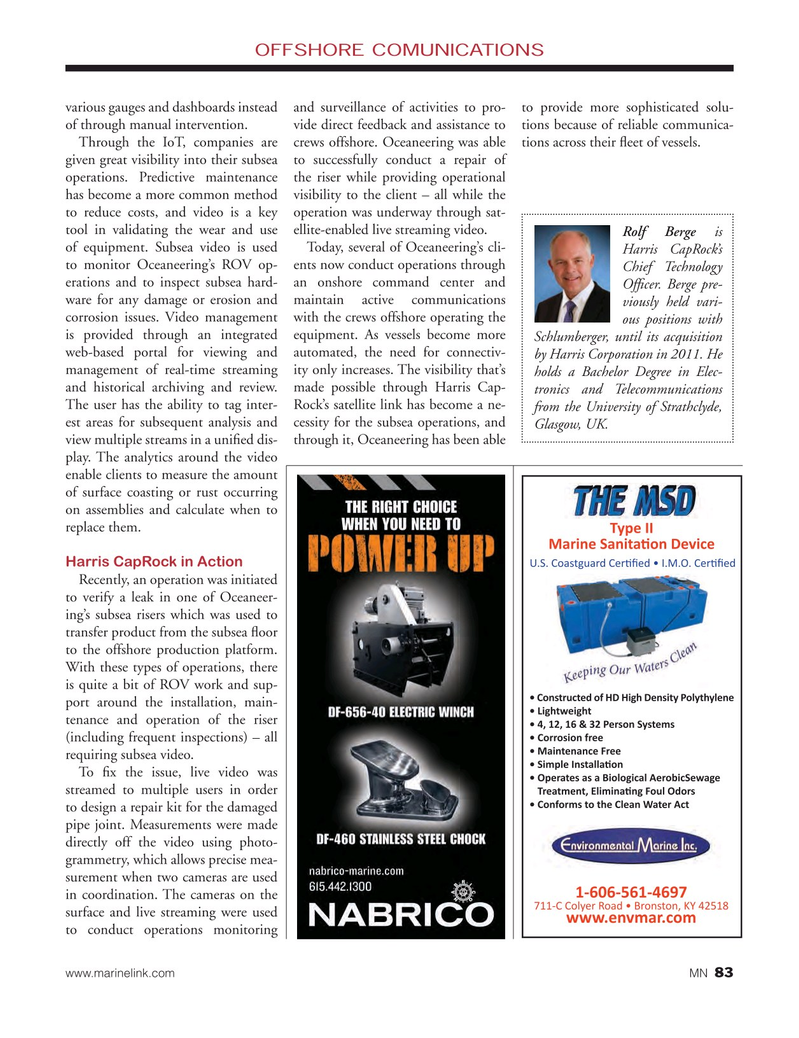 OFFSHORE COMUNICATIONS various gauges and dashboards instead and surveillance of activities to pro- to provide more sophisticated solu- of through manual intervention. vide direct feedback and assistance to tions because of reliable communica-

Through the IoT, companies are crews offshore. Oceaneering was able tions across their ? eet of vessels. given great visibility into their subsea to successfully conduct a repair of operations. Predictive maintenance the riser while providing operational has become a more common method visibility to the client – all while the to reduce costs, and video is a key operation was underway through sat- tool in validating the wear and use ellite-enabled live streaming video.

Of? cer. Berge pre- ware for any damage or erosion and maintain active communications viously held vari- corrosion issues. Video management with the crews offshore operating the ous positions with is provided through an integrated equipment. As vessels become more

Schlumberger, until its acquisition web-based portal for viewing and automated, the need for connectiv- by Harris Corporation in 2011. He management of real-time streaming ity only increases. The visibility that’s holds a Bachelor Degree in Elec- and historical archiving and review. made possible through Harris Cap- tronics and Telecommunications

The user has the ability to tag inter- Rock’s satellite link has become a ne- from the University of Strathclyde, est areas for subsequent analysis and cessity for the subsea operations, and

Glasgow, UK. view multiple streams in a uni? ed dis- through it, Oceaneering has been able play. The analytics around the video enable clients to measure the amount of surface coasting or rust occurring on assemblies and calculate when to replace them.

Recently, an operation was initiated to verify a leak in one of Oceaneer- ing’s subsea risers which was used to transfer product from the subsea ? oor to the offshore production platform.

With these types of operations, there is quite a bit of ROV work and sup- • Constructed of HD High Density Polythylene port around the installation, main- • Lightweight tenance and operation of the riser • 4, 12, 16 & 32 Person Systems • Corrosion free (including frequent inspections) – all • Maintenance Free requiring subsea video.

To ? x the issue, live video was • Operates as a Biological AerobicSewage streamed to multiple users in order

Treatment, Elimina!ng Foul Odors • Conforms to the Clean Water Act to design a repair kit for the damaged pipe joint. Measurements were made directly off the video using photo- grammetry, which allows precise mea- surement when two cameras are used 1-606-561-4697 in coordination. The cameras on the 711-C Colyer Road • Bronston, KY 42518 surface and live streaming were used www.envmar.com to conduct operations monitoring www.marinelink.com MN 83