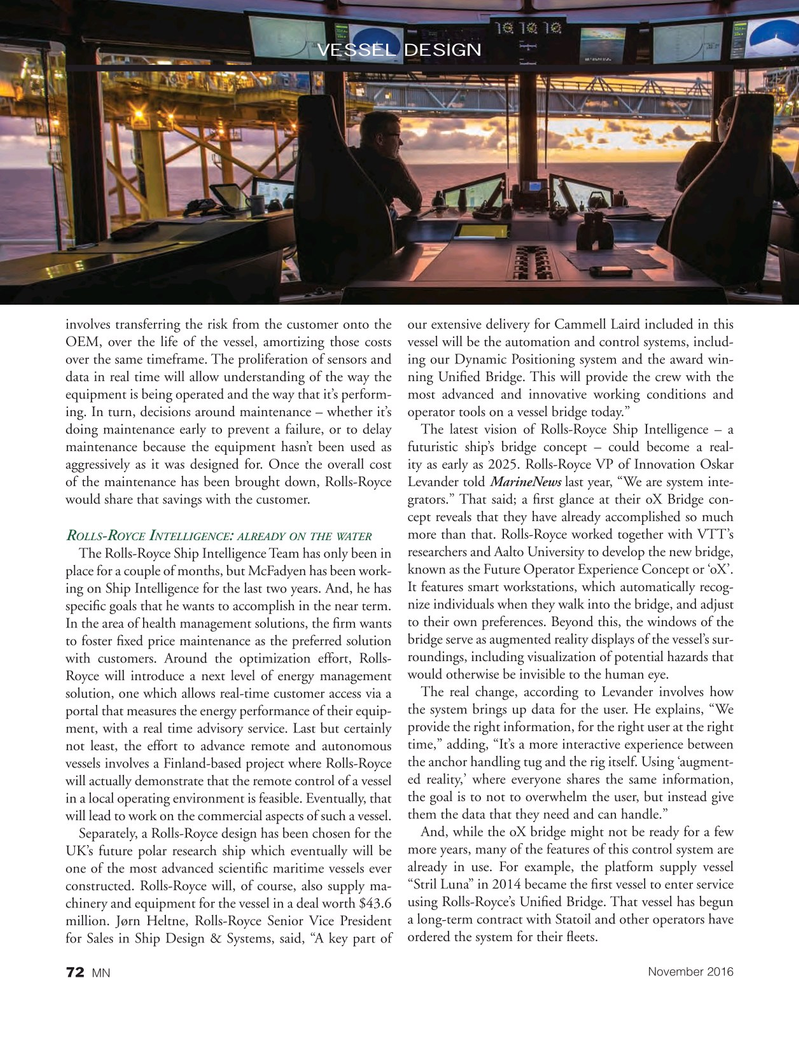 OEM, over the life of the vessel, amortizing those costs vessel will be the automation and control systems, includ- over the same timeframe. The proliferation of sensors and ing our Dynamic Positioning system and the award win- data in real time will allow understanding of the way the ning Uni? ed Bridge. This will provide the crew with the equipment is being operated and the way that it’s perform- most advanced and innovative working conditions and ing. In turn, decisions around maintenance – whether it’s operator tools on a vessel bridge today.” doing maintenance early to prevent a failure, or to delay The latest vision of Rolls-Royce Ship Intelligence – a maintenance because the equipment hasn’t been used as futuristic ship’s bridge concept – could become a real- aggressively as it was designed for. Once the overall cost ity as early as 2025. Rolls-Royce VP of Innovation Oskar of the maintenance has been brought down, Rolls-Royce Levander told MarineNews last year, “We are system inte- would share that savings with the customer. grators.” That said; a ? rst glance at their oX Bridge con- cept reveals that they have already accomplished so much more than that. Rolls-Royce worked together with VTT’s

R -R I : OLLS OYCE NTELLIGENCE ALREADY ON THE WATER

The Rolls-Royce Ship Intelligence Team has only been in researchers and Aalto University to develop the new bridge, known as the Future Operator Experience Concept or ‘oX’. place for a couple of months, but McFadyen has been work- ing on Ship Intelligence for the last two years. And, he has It features smart workstations, which automatically recog- speci? c goals that he wants to accomplish in the near term. nize individuals when they walk into the bridge, and adjust

In the area of health management solutions, the ? rm wants to their own preferences. Beyond this, the windows of the to foster ? xed price maintenance as the preferred solution bridge serve as augmented reality displays of the vessel’s sur- roundings, including visualization of potential hazards that with customers. Around the optimization effort, Rolls-

Royce will introduce a next level of energy management would otherwise be invisible to the human eye.

The real change, according to Levander involves how solution, one which allows real-time customer access via a the system brings up data for the user. He explains, “We portal that measures the energy performance of their equip- ment, with a real time advisory service. Last but certainly provide the right information, for the right user at the right not least, the effort to advance remote and autonomous time,” adding, “It’s a more interactive experience between vessels involves a Finland-based project where Rolls-Royce the anchor handling tug and the rig itself. Using ‘augment- will actually demonstrate that the remote control of a vessel ed reality,’ where everyone shares the same information, in a local operating environment is feasible. Eventually, that the goal is to not to overwhelm the user, but instead give them the data that they need and can handle.” will lead to work on the commercial aspects of such a vessel.

And, while the oX bridge might not be ready for a few

Separately, a Rolls-Royce design has been chosen for the

UK’s future polar research ship which eventually will be more years, many of the features of this control system are one of the most advanced scienti? c maritime vessels ever already in use. For example, the platform supply vessel “Stril Luna” in 2014 became the ? rst vessel to enter service constructed. Rolls-Royce will, of course, also supply ma- chinery and equipment for the vessel in a deal worth $43.6 using Rolls-Royce’s Uni? ed Bridge. That vessel has begun million. Jørn Heltne, Rolls-Royce Senior Vice President a long-term contract with Statoil and other operators have for Sales in Ship Design & Systems, said, “A key part of ordered the system for their ? eets.