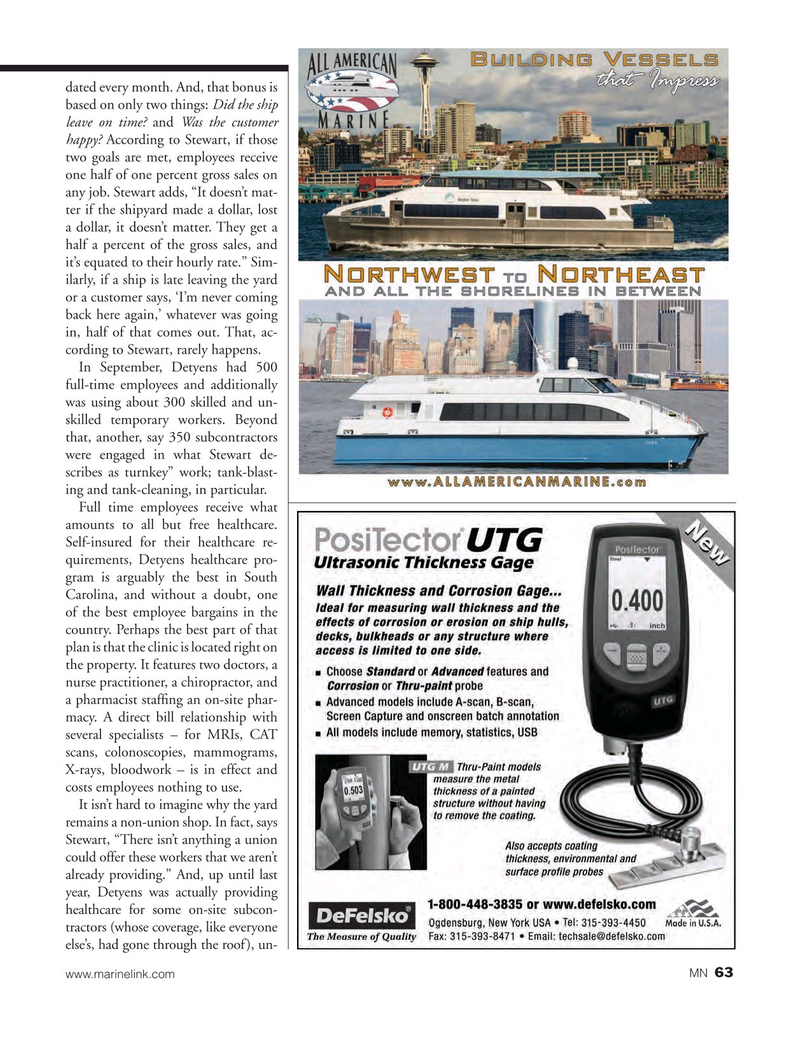 dated every month. And, that bonus is based on only two things: Did the ship leave on time? and Was the customer happy? According to Stewart, if those two goals are met, employees receive one half of one percent gross sales on any job. Stewart adds, “It doesn’t mat- ter if the shipyard made a dollar, lost a dollar, it doesn’t matter. They get a half a percent of the gross sales, and it’s equated to their hourly rate.” Sim- ilarly, if a ship is late leaving the yard or a customer says, ‘I’m never coming back here again,’ whatever was going in, half of that comes out. That, ac- cording to Stewart, rarely happens.

In September, Detyens had 500 full-time employees and additionally was using about 300 skilled and un- skilled temporary workers. Beyond that, another, say 350 subcontractors were engaged in what Stewart de- scribes as turnkey” work; tank-blast- ing and tank-cleaning, in particular.

Full time employees receive what amounts to all but free healthcare.

Self-insured for their healthcare re- quirements, Detyens healthcare pro- gram is arguably the best in South

Carolina, and without a doubt, one of the best employee bargains in the country. Perhaps the best part of that plan is that the clinic is located right on the property. It features two doctors, a nurse practitioner, a chiropractor, and a pharmacist staf? ng an on-site phar- macy. A direct bill relationship with several specialists – for MRIs, CAT scans, colonoscopies, mammograms,

X-rays, bloodwork – is in effect and costs employees nothing to use.

It isn’t hard to imagine why the yard remains a non-union shop. In fact, says

Stewart, “There isn’t anything a union could offer these workers that we aren’t already providing.” And, up until last year, Detyens was actually providing healthcare for some on-site subcon- tractors (whose coverage, like everyone else’s, had gone through the roof), un- 63 www.marinelink.com MN