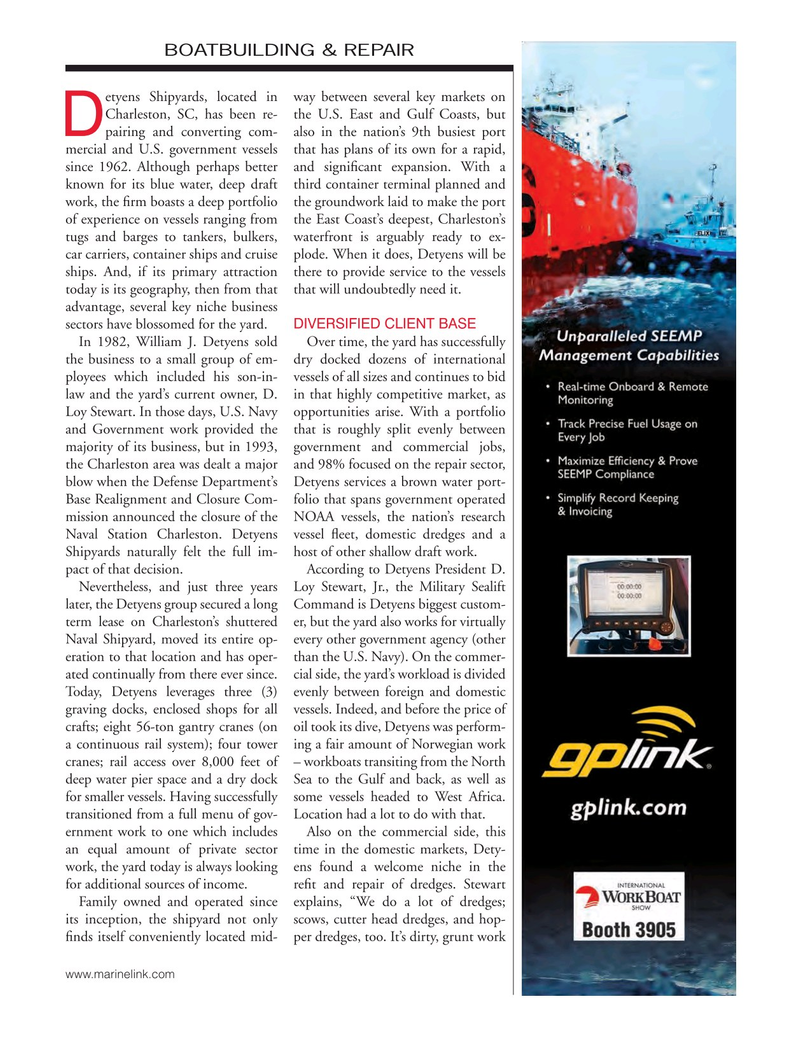 Charleston, SC, has been re- the U.S. East and Gulf Coasts, but

D pairing and converting com- also in the nation’s 9th busiest port mercial and U.S. government vessels that has plans of its own for a rapid, since 1962. Although perhaps better and signi? cant expansion. With a known for its blue water, deep draft third container terminal planned and work, the ? rm boasts a deep portfolio the groundwork laid to make the port of experience on vessels ranging from the East Coast’s deepest, Charleston’s tugs and barges to tankers, bulkers, waterfront is arguably ready to ex- car carriers, container ships and cruise plode. When it does, Detyens will be ships. And, if its primary attraction there to provide service to the vessels today is its geography, then from that that will undoubtedly need it.

In 1982, William J. Detyens sold Over time, the yard has successfully the business to a small group of em- dry docked dozens of international ployees which included his son-in- vessels of all sizes and continues to bid law and the yard’s current owner, D. in that highly competitive market, as

Loy Stewart. In those days, U.S. Navy opportunities arise. With a portfolio and Government work provided the that is roughly split evenly between majority of its business, but in 1993, government and commercial jobs, the Charleston area was dealt a major and 98% focused on the repair sector, blow when the Defense Department’s Detyens services a brown water port-

Base Realignment and Closure Com- folio that spans government operated mission announced the closure of the NOAA vessels, the nation’s research

pact of that decision. According to Detyens President D.

Naval Shipyard, moved its entire op- every other government agency (other eration to that location and has oper- than the U.S. Navy). On the commer- ated continually from there ever since. cial side, the yard’s workload is divided

Today, Detyens leverages three (3) evenly between foreign and domestic graving docks, enclosed shops for all vessels. Indeed, and before the price of crafts; eight 56-ton gantry cranes (on oil took its dive, Detyens was perform- a continuous rail system); four tower ing a fair amount of Norwegian work cranes; rail access over 8,000 feet of – workboats transiting from the North deep water pier space and a dry dock Sea to the Gulf and back, as well as for smaller vessels. Having successfully some vessels headed to West Africa. transitioned from a full menu of gov- Location had a lot to do with that.

ernment work to one which includes Also on the commercial side, this an equal amount of private sector time in the domestic markets, Dety- work, the yard today is always looking ens found a welcome niche in the for additional sources of income. re? t and repair of dredges. Stewart

Family owned and operated since explains, “We do a lot of dredges; its inception, the shipyard not only scows, cutter head dredges, and hop- ? nds itself conveniently located mid- per dredges, too. It’s dirty, grunt work www.marinelink.com