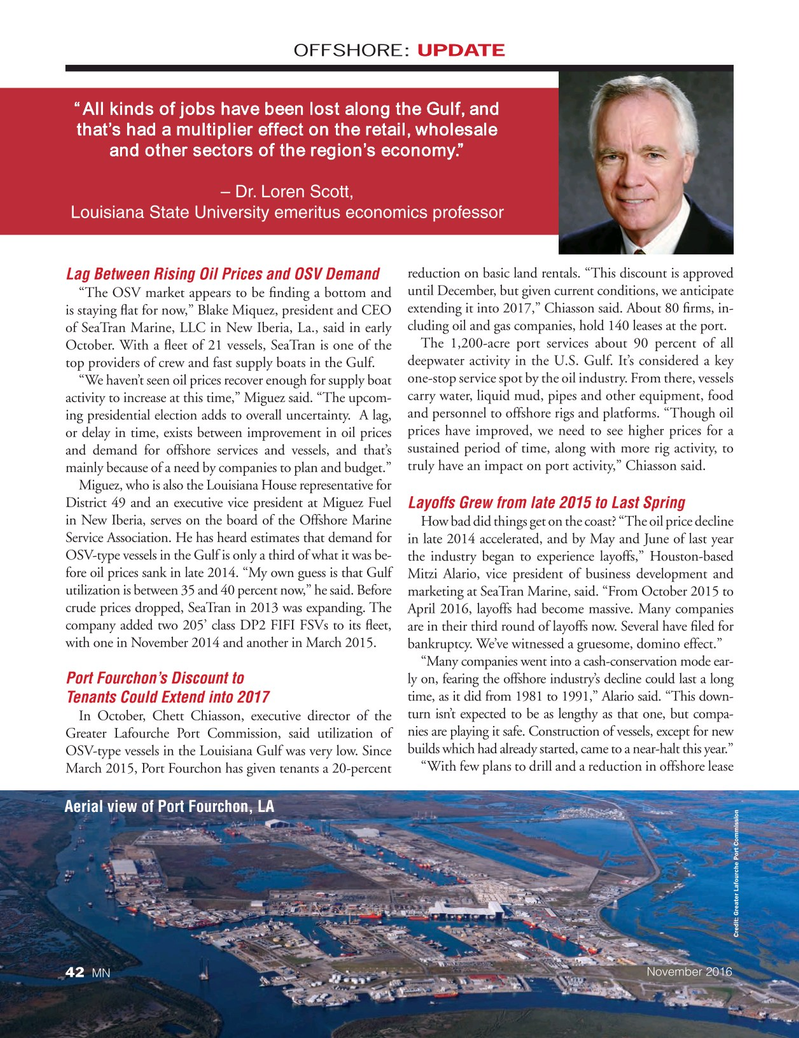 OFFSHORE: UPDATE “All kinds of jobs have been lost along the Gulf, and that’s had a multiplier effect on the retail, wholesale and other sectors of the region’s economy.” – Dr. Loren Scott,

Lag Between Rising Oil Prices and OSV Demand “The OSV market appears to be ? nding a bottom and until December, but given current conditions, we anticipate is staying ? at for now,” Blake Miquez, president and CEO extending it into 2017,” Chiasson said. About 80 ? rms, in- of SeaTran Marine, LLC in New Iberia, La., said in early cluding oil and gas companies, hold 140 leases at the port.

October. With a ? eet of 21 vessels, SeaTran is one of the deepwater activity in the U.S. Gulf. It’s considered a key top providers of crew and fast supply boats in the Gulf.

“We haven’t seen oil prices recover enough for supply boat one-stop service spot by the oil industry. From there, vessels carry water, liquid mud, pipes and other equipment, food activity to increase at this time,” Miguez said. “The upcom- ing presidential election adds to overall uncertainty. A lag, and personnel to offshore rigs and platforms. “Though oil or delay in time, exists between improvement in oil prices prices have improved, we need to see higher prices for a and demand for offshore services and vessels, and that’s sustained period of time, along with more rig activity, to truly have an impact on port activity,” Chiasson said.

mainly because of a need by companies to plan and budget.”

Miguez, who is also the Louisiana House representative for

District 49 and an executive vice president at Miguez Fuel

Layoffs Grew from late 2015 to Last Spring in New Iberia, serves on the board of the Offshore Marine How bad did things get on the coast? “The oil price decline

Service Association. He has heard estimates that demand for in late 2014 accelerated, and by May and June of last year

OSV-type vessels in the Gulf is only a third of what it was be- the industry began to experience layoffs,” Houston-based fore oil prices sank in late 2014. “My own guess is that Gulf Mitzi Alario, vice president of business development and utilization is between 35 and 40 percent now,” he said. Before marketing at SeaTran Marine, said. “From October 2015 to crude prices dropped, SeaTran in 2013 was expanding. The April 2016, layoffs had become massive. Many companies company added two 205’ class DP2 FIFI FSVs to its ? eet, are in their third round of layoffs now. Several have ? led for with one in November 2014 and another in March 2015. bankruptcy. We’ve witnessed a gruesome, domino effect.” “Many companies went into a cash-conservation mode ear- ly on, fearing the offshore industry’s decline could last a long

Tenants Could Extend into 2017

In October, Chett Chiasson, executive director of the turn isn’t expected to be as lengthy as that one, but compa-

Greater Lafourche Port Commission, said utilization of nies are playing it safe. Construction of vessels, except for new

OSV-type vessels in the Louisiana Gulf was very low. Since builds which had already started, came to a near-halt this year.” “With few plans to drill and a reduction in offshore lease

March 2015, Port Fourchon has given tenants a 20-percent