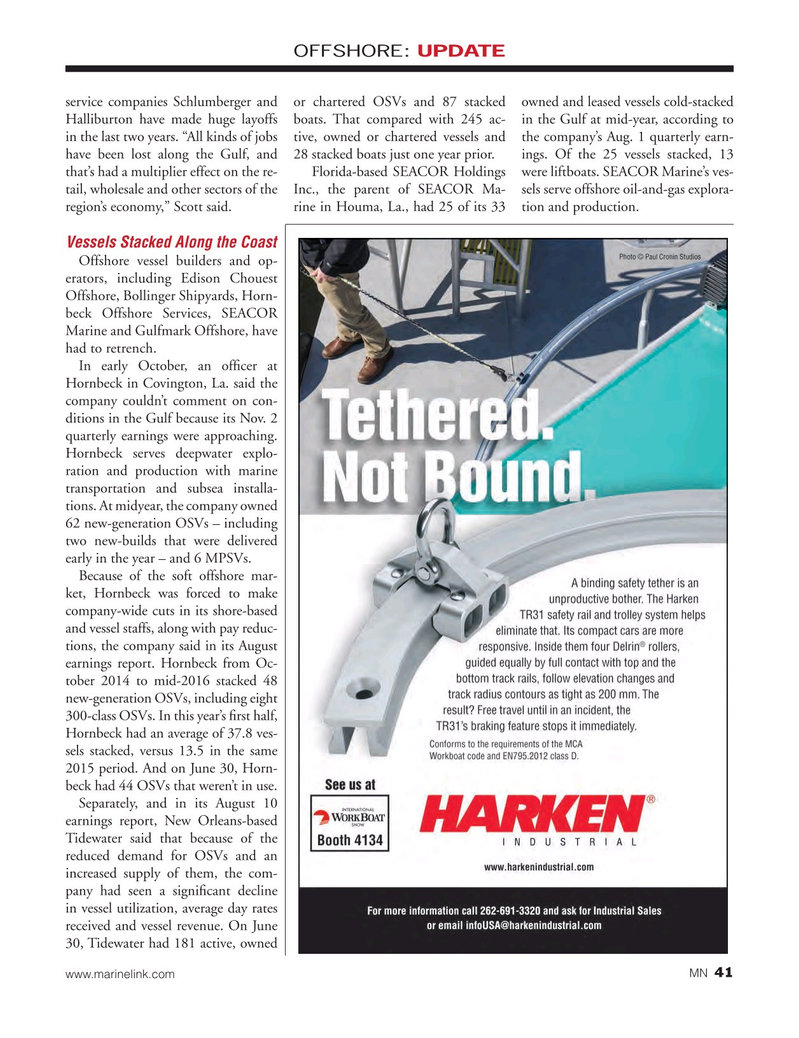 Halliburton have made huge layoffs boats. That compared with 245 ac- in the Gulf at mid-year, according to in the last two years. “All kinds of jobs tive, owned or chartered vessels and the company’s Aug. 1 quarterly earn- have been lost along the Gulf, and 28 stacked boats just one year prior. ings. Of the 25 vessels stacked, 13 that’s had a multiplier effect on the re- Florida-based SEACOR Holdings were liftboats. SEACOR Marine’s ves- tail, wholesale and other sectors of the Inc., the parent of SEACOR Ma- sels serve offshore oil-and-gas explora- region’s economy,” Scott said. rine in Houma, La., had 25 of its 33 tion and production.

Vessels Stacked Along the Coast

Marine and Gulfmark Offshore, have had to retrench.

In early October, an of? cer at

Hornbeck in Covington, La. said the company couldn’t comment on con- ditions in the Gulf because its Nov. 2 quarterly earnings were approaching.

Hornbeck serves deepwater explo- ration and production with marine transportation and subsea installa- tions. At midyear, the company owned 62 new-generation OSVs – including two new-builds that were delivered early in the year – and 6 MPSVs.

Because of the soft offshore mar- ket, Hornbeck was forced to make company-wide cuts in its shore-based and vessel staffs, along with pay reduc- tions, the company said in its August earnings report. Hornbeck from Oc- tober 2014 to mid-2016 stacked 48 new-generation OSVs, including eight 300-class OSVs. In this year’s ? rst half,

Separately, and in its August 10 earnings report, New Orleans-based

Tidewater said that because of the reduced demand for OSVs and an increased supply of them, the com- pany had seen a signi? cant decline in vessel utilization, average day rates received and vessel revenue. On June 30, Tidewater had 181 active, owned 41 www.marinelink.com MN