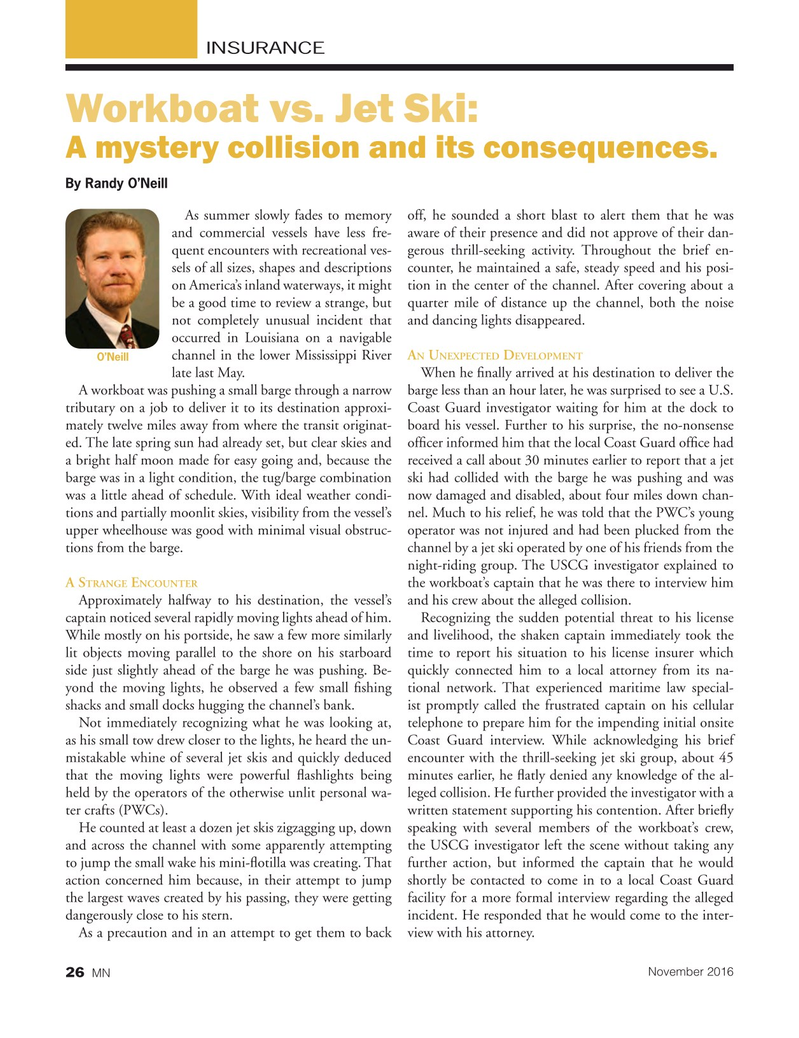 A mystery collision and its consequences.

As summer slowly fades to memory off, he sounded a short blast to alert them that he was and commercial vessels have less fre- aware of their presence and did not approve of their dan- quent encounters with recreational ves- gerous thrill-seeking activity. Throughout the brief en- sels of all sizes, shapes and descriptions counter, he maintained a safe, steady speed and his posi- on America’s inland waterways, it might tion in the center of the channel. After covering about a be a good time to review a strange, but quarter mile of distance up the channel, both the noise not completely unusual incident that and dancing lights disappeared.

occurred in Louisiana on a navigable

O’Neill late last May. When he ? nally arrived at his destination to deliver the

A workboat was pushing a small barge through a narrow barge less than an hour later, he was surprised to see a U.S. tributary on a job to deliver it to its destination approxi- Coast Guard investigator waiting for him at the dock to mately twelve miles away from where the transit originat- board his vessel. Further to his surprise, the no-nonsense ed. The late spring sun had already set, but clear skies and of? cer informed him that the local Coast Guard of? ce had a bright half moon made for easy going and, because the received a call about 30 minutes earlier to report that a jet barge was in a light condition, the tug/barge combination ski had collided with the barge he was pushing and was was a little ahead of schedule. With ideal weather condi- now damaged and disabled, about four miles down chan- tions and partially moonlit skies, visibility from the vessel’s nel. Much to his relief, he was told that the PWC’s young upper wheelhouse was good with minimal visual obstruc- operator was not injured and had been plucked from the tions from the barge. channel by a jet ski operated by one of his friends from the night-riding group. The USCG investigator explained to

Approximately halfway to his destination, the vessel’s and his crew about the alleged collision.

captain noticed several rapidly moving lights ahead of him. Recognizing the sudden potential threat to his license

While mostly on his portside, he saw a few more similarly and livelihood, the shaken captain immediately took the lit objects moving parallel to the shore on his starboard time to report his situation to his license insurer which side just slightly ahead of the barge he was pushing. Be- quickly connected him to a local attorney from its na- yond the moving lights, he observed a few small ? shing tional network. That experienced maritime law special- shacks and small docks hugging the channel’s bank. ist promptly called the frustrated captain on his cellular

Not immediately recognizing what he was looking at, telephone to prepare him for the impending initial onsite as his small tow drew closer to the lights, he heard the un- Coast Guard interview. While acknowledging his brief mistakable whine of several jet skis and quickly deduced encounter with the thrill-seeking jet ski group, about 45 that the moving lights were powerful ? ashlights being minutes earlier, he ? atly denied any knowledge of the al- held by the operators of the otherwise unlit personal wa- leged collision. He further provided the investigator with a ter crafts (PWCs). written statement supporting his contention. After brie? y

He counted at least a dozen jet skis zigzagging up, down speaking with several members of the workboat’s crew, and across the channel with some apparently attempting the USCG investigator left the scene without taking any to jump the small wake his mini-? otilla was creating. That further action, but informed the captain that he would action concerned him because, in their attempt to jump shortly be contacted to come in to a local Coast Guard the largest waves created by his passing, they were getting facility for a more formal interview regarding the alleged dangerously close to his stern. incident. He responded that he would come to the inter-

As a precaution and in an attempt to get them to back view with his attorney.