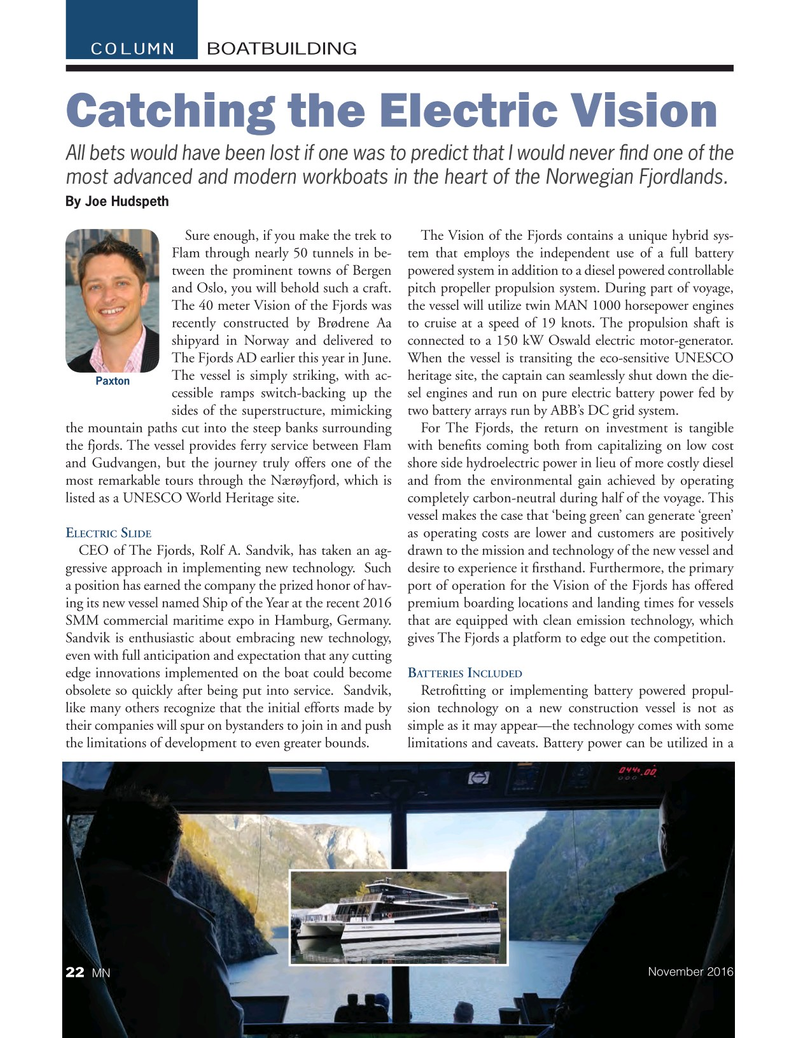 All bets would have been lost if one was to predict that I would never ? nd one of the most advanced and modern workboats in the heart of the Norwegian Fjordlands.

Sure enough, if you make the trek to The Vision of the Fjords contains a unique hybrid sys-

Flam through nearly 50 tunnels in be- tem that employs the independent use of a full battery tween the prominent towns of Bergen powered system in addition to a diesel powered controllable and Oslo, you will behold such a craft. pitch propeller propulsion system. During part of voyage,

The 40 meter Vision of the Fjords was the vessel will utilize twin MAN 1000 horsepower engines recently constructed by Brødrene Aa to cruise at a speed of 19 knots. The propulsion shaft is shipyard in Norway and delivered to connected to a 150 kW Oswald electric motor-generator.

The Fjords AD earlier this year in June. When the vessel is transiting the eco-sensitive UNESCO

The vessel is simply striking, with ac- heritage site, the captain can seamlessly shut down the die-

the mountain paths cut into the steep banks surrounding For The Fjords, the return on investment is tangible the fjords. The vessel provides ferry service between Flam with bene? ts coming both from capitalizing on low cost and Gudvangen, but the journey truly offers one of the shore side hydroelectric power in lieu of more costly diesel most remarkable tours through the Nærøyfjord, which is and from the environmental gain achieved by operating listed as a UNESCO World Heritage site. completely carbon-neutral during half of the voyage. This vessel makes the case that ‘being green’ can generate ‘green’

E S as operating costs are lower and customers are positively

CEO of The Fjords, Rolf A. Sandvik, has taken an ag- drawn to the mission and technology of the new vessel and gressive approach in implementing new technology. Such desire to experience it ? rsthand. Furthermore, the primary a position has earned the company the prized honor of hav- port of operation for the Vision of the Fjords has offered ing its new vessel named Ship of the Year at the recent 2016 premium boarding locations and landing times for vessels

SMM commercial maritime expo in Hamburg, Germany. that are equipped with clean emission technology, which

Sandvik is enthusiastic about embracing new technology, gives The Fjords a platform to edge out the competition.

even with full anticipation and expectation that any cutting

ATTERIES NCLUDED edge innovations implemented on the boat could become B I obsolete so quickly after being put into service. Sandvik, Retro? tting or implementing battery powered propul- like many others recognize that the initial efforts made by sion technology on a new construction vessel is not as their companies will spur on bystanders to join in and push simple as it may appear—the technology comes with some the limitations of development to even greater bounds. limitations and caveats. Battery power can be utilized in a