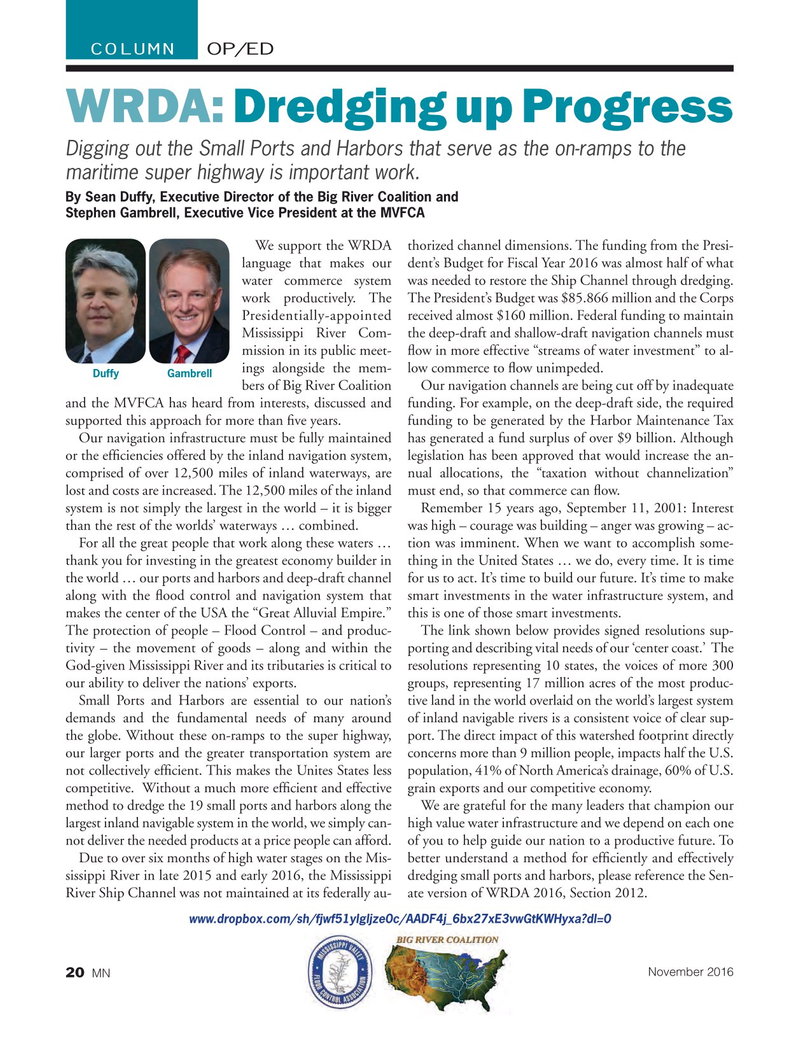 Digging out the Small Ports and Harbors that serve as the on-ramps to the maritime super highway is important work.

By Sean Duffy, Executive Director of the Big River Coalition and

We support the WRDA thorized channel dimensions. The funding from the Presi- language that makes our dent’s Budget for Fiscal Year 2016 was almost half of what water commerce system was needed to restore the Ship Channel through dredging. work productively. The The President’s Budget was $85.866 million and the Corps

Mississippi River Com- the deep-draft and shallow-draft navigation channels must mission in its public meet- ? ow in more effective “streams of water investment” to al- ings alongside the mem- low commerce to ? ow unimpeded.

Duffy Gambrell bers of Big River Coalition Our navigation channels are being cut off by inadequate and the MVFCA has heard from interests, discussed and funding. For example, on the deep-draft side, the required supported this approach for more than ? ve years. funding to be generated by the Harbor Maintenance Tax

Our navigation infrastructure must be fully maintained has generated a fund surplus of over $9 billion. Although or the ef? ciencies offered by the inland navigation system, legislation has been approved that would increase the an- comprised of over 12,500 miles of inland waterways, are nual allocations, the “taxation without channelization” lost and costs are increased. The 12,500 miles of the inland must end, so that commerce can ? ow.

system is not simply the largest in the world – it is bigger Remember 15 years ago, September 11, 2001: Interest than the rest of the worlds’ waterways … combined. was high – courage was building – anger was growing – ac-

For all the great people that work along these waters … tion was imminent. When we want to accomplish some- thank you for investing in the greatest economy builder in thing in the United States … we do, every time. It is time the world … our ports and harbors and deep-draft channel for us to act. It’s time to build our future. It’s time to make along with the ? ood control and navigation system that smart investments in the water infrastructure system, and makes the center of the USA the “Great Alluvial Empire.” this is one of those smart investments.

The protection of people – Flood Control – and produc- The link shown below provides signed resolutions sup- tivity – the movement of goods – along and within the porting and describing vital needs of our ‘center coast.’ The

God-given Mississippi River and its tributaries is critical to resolutions representing 10 states, the voices of more 300 our ability to deliver the nations’ exports. groups, representing 17 million acres of the most produc-

Small Ports and Harbors are essential to our nation’s tive land in the world overlaid on the world’s largest system demands and the fundamental needs of many around of inland navigable rivers is a consistent voice of clear sup- the globe. Without these on-ramps to the super highway, port. The direct impact of this watershed footprint directly our larger ports and the greater transportation system are concerns more than 9 million people, impacts half the U.S. not collectively ef? cient. This makes the Unites States less population, 41% of North America’s drainage, 60% of U.S. competitive. Without a much more ef? cient and effective grain exports and our competitive economy. method to dredge the 19 small ports and harbors along the We are grateful for the many leaders that champion our largest inland navigable system in the world, we simply can- high value water infrastructure and we depend on each one not deliver the needed products at a price people can afford. of you to help guide our nation to a productive future. To

Due to over six months of high water stages on the Mis- better understand a method for ef? ciently and effectively sissippi River in late 2015 and early 2016, the Mississippi dredging small ports and harbors, please reference the Sen-

River Ship Channel was not maintained at its federally au- ate version of WRDA 2016, Section 2012. www.dropbox.com/sh/fjwf51ylgljze0c/AADF4j_6bx27xE3vwGtKWHyxa?dl=0