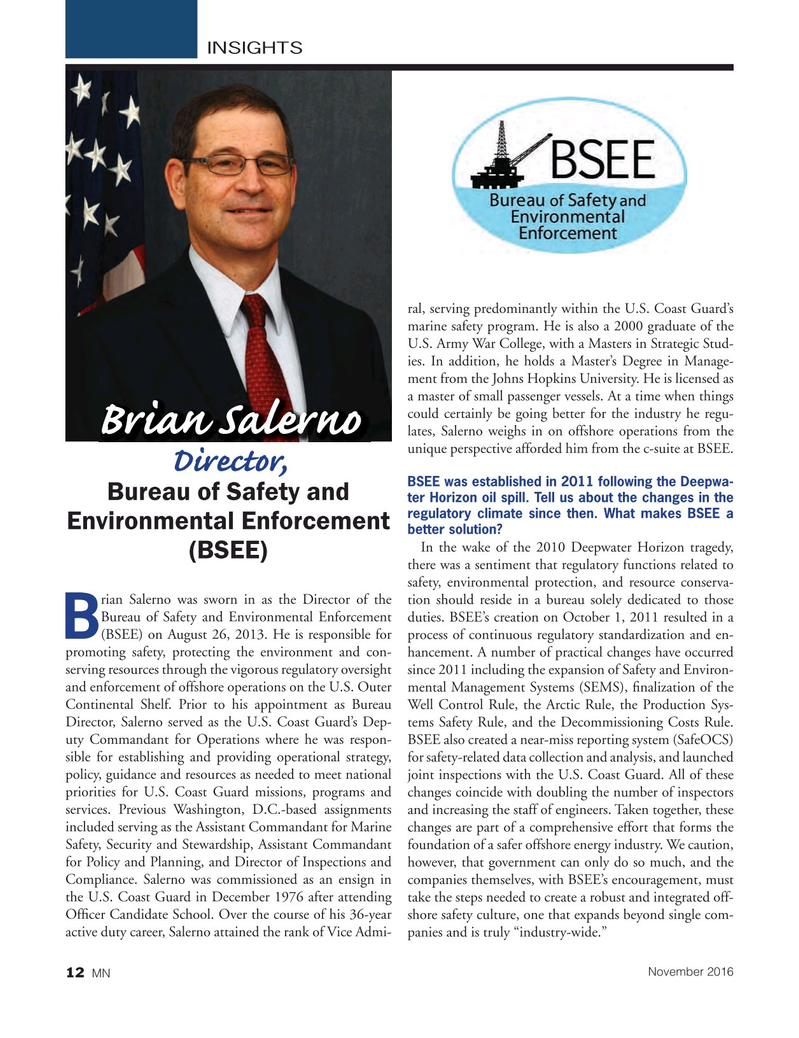 INSIGHTS ral, serving predominantly within the U.S. Coast Guard’s marine safety program. He is also a 2000 graduate of the

U.S. Army War College, with a Masters in Strategic Stud- ies. In addition, he holds a Master’s Degree in Manage- ment from the Johns Hopkins University. He is licensed as a master of small passenger vessels. At a time when things could certainly be going better for the industry he regu-

Brian Salerno lates, Salerno weighs in on offshore operations from the unique perspective afforded him from the c-suite at BSEE.

BSEE was established in 2011 following the Deepwa-

Bureau of Safety and ter Horizon oil spill. Tell us about the changes in the regulatory climate since then. What makes BSEE a

In the wake of the 2010 Deepwater Horizon tragedy, (BSEE) there was a sentiment that regulatory functions related to safety, environmental protection, and resource conserva- rian Salerno was sworn in as the Director of the tion should reside in a bureau solely dedicated to those

Bureau of Safety and Environmental Enforcement duties. BSEE’s creation on October 1, 2011 resulted in a

B(BSEE) on August 26, 2013. He is responsible for process of continuous regulatory standardization and en- promoting safety, protecting the environment and con- hancement. A number of practical changes have occurred serving resources through the vigorous regulatory oversight since 2011 including the expansion of Safety and Environ- and enforcement of offshore operations on the U.S. Outer mental Management Systems (SEMS), ? nalization of the

Continental Shelf. Prior to his appointment as Bureau Well Control Rule, the Arctic Rule, the Production Sys-

Director, Salerno served as the U.S. Coast Guard’s Dep- tems Safety Rule, and the Decommissioning Costs Rule. uty Commandant for Operations where he was respon- BSEE also created a near-miss reporting system (SafeOCS) sible for establishing and providing operational strategy, for safety-related data collection and analysis, and launched policy, guidance and resources as needed to meet national joint inspections with the U.S. Coast Guard. All of these priorities for U.S. Coast Guard missions, programs and changes coincide with doubling the number of inspectors services. Previous Washington, D.C.-based assignments and increasing the staff of engineers. Taken together, these included serving as the Assistant Commandant for Marine changes are part of a comprehensive effort that forms the

Safety, Security and Stewardship, Assistant Commandant foundation of a safer offshore energy industry. We caution, for Policy and Planning, and Director of Inspections and however, that government can only do so much, and the

Compliance. Salerno was commissioned as an ensign in companies themselves, with BSEE’s encouragement, must the U.S. Coast Guard in December 1976 after attending take the steps needed to create a robust and integrated off-

Of? cer Candidate School. Over the course of his 36-year shore safety culture, one that expands beyond single com- active duty career, Salerno attained the rank of Vice Admi- panies and is truly “industry-wide.”