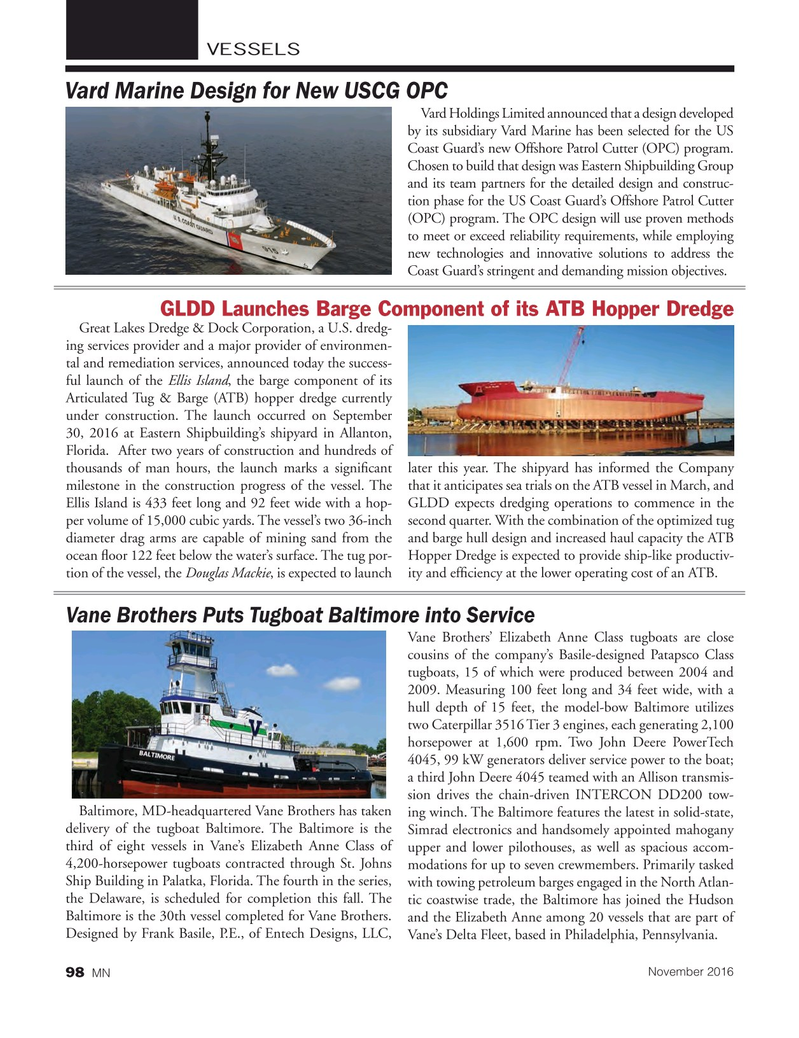 Chosen to build that design was Eastern Shipbuilding Group and its team partners for the detailed design and construc- tion phase for the US Coast Guard’s Offshore Patrol Cutter (OPC) program. The OPC design will use proven methods to meet or exceed reliability requirements, while employing new technologies and innovative solutions to address the

Great Lakes Dredge & Dock Corporation, a U.S. dredg- ing services provider and a major provider of environmen- tal and remediation services, announced today the success- ful launch of the Ellis Island, the barge component of its

Florida. After two years of construction and hundreds of thousands of man hours, the launch marks a signi? cant later this year. The shipyard has informed the Company milestone in the construction progress of the vessel. The that it anticipates sea trials on the ATB vessel in March, and

Ellis Island is 433 feet long and 92 feet wide with a hop- GLDD expects dredging operations to commence in the per volume of 15,000 cubic yards. The vessel’s two 36-inch second quarter. With the combination of the optimized tug diameter drag arms are capable of mining sand from the and barge hull design and increased haul capacity the ATB ocean ? oor 122 feet below the water’s surface. The tug por- Hopper Dredge is expected to provide ship-like productiv- tion of the vessel, the Douglas Mackie, is expected to launch ity and ef? ciency at the lower operating cost of an ATB.

Baltimore, MD-headquartered Vane Brothers has taken ing winch. The Baltimore features the latest in solid-state, delivery of the tugboat Baltimore. The Baltimore is the Simrad electronics and handsomely appointed mahogany third of eight vessels in Vane’s Elizabeth Anne Class of upper and lower pilothouses, as well as spacious accom- 4,200-horsepower tugboats contracted through St. Johns modations for up to seven crewmembers. Primarily tasked

Ship Building in Palatka, Florida. The fourth in the series, with towing petroleum barges engaged in the North Atlan- the Delaware, is scheduled for completion this fall. The tic coastwise trade, the Baltimore has joined the Hudson

Baltimore is the 30th vessel completed for Vane Brothers. and the Elizabeth Anne among 20 vessels that are part of